skip to main | skip to sidebar

From the Hollywood Reporter:

Titled "Living in the Material World: George Harrison," the documentary will take on the whole of the Beatles guitarist's life before, during and after his time in the world's most popular and successful band.

...Olivia [Harrison] and Scorsese acknowledge that their film will feature never-before-seen footage and personal recordings of Harrison's, as he saved everything and left a ton of material. Scorsese says that all of that personal music led the way to the nonchronological exploration they wanted to take.

Martin Scorsese revealed Thursday that he has finished shooting documentary "Living in the Material World: George Harrison," working in tandem with Olivia Harrison, the musician's widow.

...Scorsese said the former Beatles' life was a remarkable musical and spiritual voyage. He and Olivia Harrison both said George Harrison was always trying to find the balance between the physical and the spiritual, hence the film's title.

"I grew up a Roman Catholic and wanted to become a priest, so it is a subject matter that has never left me. The more you're in the material world, the more the search for serenity," Scorsese said.

...Film also uses never-before-seen footage in tracing the guitarist and songwriter's life, from his days with the Beatles until his death in 2001. It includes interviews with those closest to him, including Paul McCartney, Ringo Starr, Eric Clapton, Eric Idle, Tom Petty, Yoko Ono and Phil Spector.

It's one of the hottest classes on the UC Berkeley campus. Eager students took a quiz just to qualify, with a waiting list twice the capacity of the classroom.

...The course was conceived and taught by undergrad Max Keller.

"I've dedicated chunks of my life to creating this course," Keller said. "I took almost a year to build this course from the ground up. I researched; I read 15-20 books. I went back and I learned every aspect of them."

"But it doesn't matter when you were born. People love them regardless of their age, their music is timeless," Keller said.

Online bidding on a signed sleeve from Sgt. Pepper’s Lonely Hearts Club Band has already reached over $31,000, according to reports on WhatSellsBest.com.

The website, which monitors rare items placed for auction on eBay, had cited that figure halfway into the 10-day auction, which ends in another two days.

Adding to the value of the sleeve is the fact that there are photographs documenting the four Beatles signing the album.


The movie would feature actors portraying the Fab Four and cover the years when rock ’n’ roll was moving from its cool, ‘let it be’ vibe to the point where it was controlled by soulless multinational corporations.

A photographer has expressed surprise at the condition of negatives depicting his previously unseen images of The Beatles which had lain forgotten for more than 45 years.

Speaking to Amateur Photographer (AP), photographer Paul Berriff explained how he shot the images as an untrained 16-year-old while working as an editorial assistant on the Yorkshire Evening Post.

He said the 37 pictures of the Fab Four were among 850 negatives that have languished in various attics for more than four decades since the early 1960s.

The pictures show band members during unguarded moments on and off stage during a tour in 1963 and 1964. 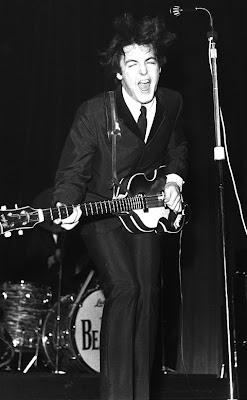 Ringo interview on the BBC's Sound of the 70s

Ringo Starr guests on Johnnie Walker's "Sounds of the 70s Show." You can hear it for two more days here.
Posted by John at Friday, April 30, 2010 No comments:

...what made the Rutles truly remarkable was the involvement of George Harrison. The Beatles' guitarist played a cameo role of a TV newsman interviewing Palin outside the Rutles' "Banana" headquarters in London. More importantly, Harrison was able to draw superstars such as Mick Jagger (playing himself, of course), Ronnie Wood and Paul Simon into the project.
"George was in it up to his neck," recalls Innes, who will perform Rutles favourites at a rare club performance tomorrow night at Hamilton rock club This Ain't Hollywood. "He was really behind it. He brought in film from the archives so (director) Gary Weis could match it. George showed up for all the filming."

For all your Rutles needs:

McCartney reissues in the works

Concord Music Group has plans to reissue more than two dozen Paul McCartney albums, beginning with Band on the Run in August with added bonus material.
Posted by John at Wednesday, April 21, 2010 No comments: